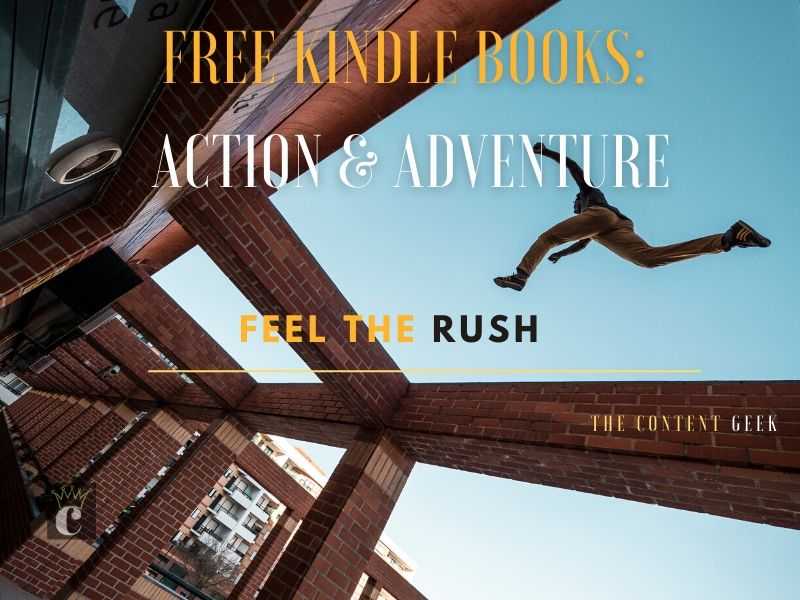 Hi there all, on my recent post I shared with you the list of platforms to get free books to read. I suggest Kindle. It has a variety of free kindle books category wise. From action-adventure to the crime thriller, horror to romance, historical fiction to sports drama. You really don’t want to get disappointed after getting into any platform. Also, if you prefer listening to a book instead of reading, welcome to Audible.

Now I am going to share with you a few handpicked- Free Kindle Books: Action & Adventure. Check out the series of posts 4 / 6

But on this post let’s focus on some amazing- Free Kindle Books: Action & Adventure. Pick your fav book online and start reading like a good Geek.

Here is the list of best- Free Kindle Books: Action & Adventure. What’s your fav? Click on the respective links and have fun.

The Time Traveller, a dreamer obsessed with traveling through time, builds himself a time machine and, much to his surprise, travels over 800,000 years into the future. He lands in the year 802701: the world has been transformed by a society living in apparent harmony and bliss, but as the Traveler stays in the future he discovers a hidden barbaric and depraved subterranean class. Wells’s transparent commentary on the capitalist society was an instant bestseller and launched the time-travel genre.

Swindled out of his inheritance, recently orphaned David Balfour finds himself kidnapped and aboard a slave ship bound for the Carolinas shortly after the Jacobite rising of 1745. A shipwreck leads to a chance encounter and an unlikely rescuer—Highland rebel and suspected assassin Alan Breck Stewart. An incredible friendship blossoms between the two young men, who occupy opposite ends of the political and religious spectra. Together they return to the mainland, outwit many murderous foes and schemers, and attempt to restore David to his rightful fortune.

The Orlando File (Book One)

Probably one of the best Free Kindle Books on Amazon.

Perhaps the Most Gripping Conspiracy Thriller you will ever read!

Imagine this: you’re involved in a car accident. You partner is almost killed, left disabled in a wheel chair for the rest of their life. It’s not your fault. But you can never forgive yourself.

Then, a few years later, unwittingly, you get dragged into a conspiracy: six of the world’s leading geneticists have all ‘committed suicide’ in the past seven days, your brother-in-law being the latest to die. Establishing that those who died were all employees of a secretive research company based in Orlando, you set out to discover the truth behind their deaths.

You discover that those who died were killed to stop them unveiling the results of their revolutionary research, a discovery that could usher in a new age of hope and health for all humanity. You vow to find who was responsible for their deaths and to uncover the powerful secret they were killed to protect.

In a race against time, it’s Ray Luck against the world! When Ray Luck – a top cyber security expert – accidentally stumbles upon a devastating secret while surfing the web, he knows immediately he is in way above his head and soon he is being hunted by both Mossad and the British Security Services.

Alone, desperate, with only three days to live, Ray is a man with not one, but several missions: to save the life of his girlfriend who has been kidnapped by the security services; to prevent a terrorist cyber attack destroying London; to save the Middle East peace process; and to bring one of the most powerful men in the world to justice for the savage killing of an apparently innocent woman, a murder certain powerful people in the British Government are determined to cover up at all costs. Only Ray can stop them all. But how?

Did you enjoy the list of Free Kindle Books on Amazon: Action & Adventure? What’s your fav? Feel free to share…

Also, find the best Spiritual books and books that were made into epic movies. Hope you have enjoyed the read. Stay safe.

Do give a try reading my book- 10 Days. Thank you.