How’s ya all? If prehistoric facts or bytes excites you, here is one- The Lost Cities discovered in India. Lord Krishna’s Dwaraka to Lord Hanuman’s Kishkinda, a list of all 15 major lost cities discovered. How many of them did you know? Let us know…

South India was the fav hub of architectural magicians. The beautiful art, architecture, and ancient technology one can witness, existing still with a great deal of destruction, easily can make your head scratch…

In ‘God’s Own Country’ Kerala, a port city, Muziris was discovered and excavated in Kodungallur. The city is situated on the banks of the Periyar River. Archaeologists have successfully found artifacts belonging to countries like Egypt, Yemen, Roman, and West Asia.

Nagarjunakonda is an island in the middle of the Nagarjuna Sagar dam in the Guntur district of Andhra Pradesh, ‎Macherla. Excavations revealed Buddhist ruins, stupas, viharas (monastery complexes), chaityas (temples), and mandapams(pillared pavilions). The former capital of the Ikshvaku dynasty and a Buddhist town showcased multiple white marble depictions of Buddha’s life.

Discovered in: 1926 AD; by archaeologists AR Saraswat and S Venkataramaiah

Watching Ramayana during Lockdown? Heard about Kishkinda– the realm of the monkey gods. The kingdom where Sugriva ruled with the assistance of his friend, Lord Hanuman after Bali. The excavated remains date back to around 300 BC, which strongly makes a point.

Vijayanagar city is located on the south bank of the Tungabhadra River in the Bellary District of northern Karnataka, Hampi. The city was built around the religious center of the Virupaksha temple at the famous UNESCO-listed world heritage site of Hampi. The lost Indian city was home to the Vijayanagar Kingdom that rose to its prime under the rule of Krishnadevaraya.

Pattadakal is the most important tourist attraction of Karnataka. The heritage site is situated on the bank of river Malaprabha. It is located about 10 km from Aihole and 22 km from Badami and known for Chalukya monuments and temples of Jain Narayana Temple, Virupaksha Temple, Sangameshwara Temple, Kashi Vishwanatha Temple, and Mallikarjuna Temple and one of the World Heritage sites in India. The Virupaksha temple is one of the popular tourist destinations that was built by Queen Loka Mahadevi (Trilokyamahadevi) in 745 to commemorate her husband’s victory (Vikramaditya II) over the Pallavas of Kanchi.

Poompuhar also is known as Puhar was the town of Tamil Nadu, which was an ancient port city known as Kāveripattinam. The city of Poompuhar was built on the north banks of the river Kaveri and was a major fort of the Chola empire. Later, a king Maravarma Kulasekara Pandiyan built Masilamani Nathar Koil Temple in 1305, which still manages to impress all the tourists to Poompuhar with its architectural richness.

Established in: around 100 BC

Abandoned in: around 300 BC

The pre-historic site in Fatehabad district of Haryana belongs to the Indus Valley Civilization. The archaeological site was part of the lower middle valley of the dried up Saraswati river.

Established in: around 2500 BC

A major Harappan site discovered in the Rupnagar district of Punjab, India. The Archaeological Museum of ASI exhibits the remains of the first Harappan site of Independent India. The ancient town of Rupnagar is said to have been named by a Gujjar Raja called Rokeshar, who ruled during the 11th century and named it after his son Rup Sen.

Pre-dating most of the ancient cities of the Indus Valley Civilisation, Rakhigarhi is one of the oldest and one of the largest settlements of that era. However much like other cities of Harappa and Mohenjo Daro; paved roads, drainage system, large rainwater collection systems, storage system, terracotta bricks, statue production, and skilled application of bronze & precious metals were found at the excavated site.

B. B. Lal, erstwhile DG of Archaeological Survey of India, stated: “Kalibangan in Hanumangarh, Rajasthan has given the evidence of the earliest plowed agricultural field ever revealed through excavation.” And then there are unique fire altars here that make it so important.

Discovered in: 1919 AD; by Luigi Pio Tessitori, an Italian Indologist, who was working on Ram Charit Manas by Tulsidas

Lothal ranks high in the list of the lost cities of India belonging to the Indus Valley civilization that was discovered and excavated from Saragwala Village in Ahmedabad, Gujarat. Though floods wiped off the town during that time, structures like wells, dwarfed walls, baths, drains, and paved floors can still be seen. This shows how strong the structures were even during that time.

A favorite of the archaeologists, Dholavira is one of the lost Indian cities of the Indus Valley Civilisation presently in Khadir Bet in Bhachau Taluka of Kutch, Gujarat. The excavated site includes reservoirs, step well, and various other antiquities such as seals, beads, animal bones, gold, silver, terracotta ornaments, & vessels. Excavations here also brought light to the well-planned designs and organized constructions during those times.

Another lost city of the Indus Valley Civilisation, Surkotada was discovered in 1964 in Rapar Taluka of Kutch, Gujarat. The ancient mounds and ruins here are hidden by sandstone hills covered with red laterite soil that gives the entire area a reddish-brown color.

Dwarka, one of the seven sacred cities of Hinduism and listed as Sapta Puri is the sacred city of Lord Krishna. It is said to have been submerged 6 times in total. Excavated as a submerged city near the present-day town of Dwarka, Gujarat. Huge pillars, antiques, and massive stone walls are visible undersea. However, it is yet to be confirmed if those belong to the times of Lord Krishna. Carbon dating could trace these recovered ruins only up to the 15th century BC. In modern days it is developed as a scuba diving site.

The town needs no introduction in Sanchi. One of the famous historical places in India, Sanchi is known for its Ashoka pillar and Greco-Buddhist style of stupas that depict various scenes from the Jataka tales and stories of Buddha’s life. The relics of Buddha at the once lost city of India were painted with a Mauryan polish to make them glow like glass.

Vasai is the part of Vasai Virar city and one of the most popular shooting destinations around Mumbai. The Bassein Fort is protected by the Archaeological Survey of India and has a list of monuments of national importance.

That’s our list. Did you like it? Would you like to know more? Do you know anything We missed? Then, use the comments box below. Knowledge is best when shared. 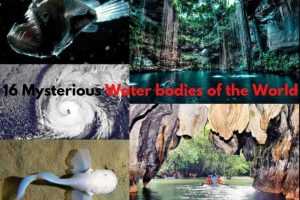